When can baby eat pears?

Do I have to cook pears?

Do I have to peel pears?

How to cook pears

How to puree pears

How to freeze pear baby food

When can baby eat pears?

Do I have to cook pears?

Do I have to peel pears?

How to cook pears

How to puree pears

How to freeze pear baby food

Learn to prepare the perfect pear baby food dishes with our recipes, ideas and tips!

We think there’s nothing quite as luscious as a ripe, juicy pear… and babies everywhere agree!

There are so many varieties of pear available – and so many seasonal variations in their harvesting – that pears are available all year round in many parts of the world.

Anjou, Bosc, Bartlett and Comice pears are the most popular in the US – although Conference pears, with their interesting, russety skin, are gaining in favour.

Pears come with a variety of skin colours – including yellow, green, brown and red – and usually lighten in colour as they ripen. When fully ripe, pears should be sweet, juicy and almost buttery (with a slight ‘graininess’) in texture.

So let’s get baby passionate about pears…

When can my baby eat pears?

According to leading health organizations around the world, babies do not need anything other than breast milk or formula for the first 6 months of life.

But if your pediatrician recommends introducing solid foods to your baby before 6 months, then pears are considered to be one of the safest foods to give as a first food. Allergic reactions to pears are extremely rare (more about that later) – and their low acidity makes them gentle on tiny tummies!

Pears tend to keep stools loose – so avoid giving them to your baby if he is suffering from diarrhea.

Read more about choosing the best first food for baby

Choosing and storing the fruit for your pear baby food recipes

…That the pear is related to apple and quince – and is actually a member of the ROSE family?

Pears are picked before they are ripe. If they are allowed to ripen on the tree, the sugars in the pear will turn to starch crystals, giving the fruit an unpleasant, gritty texture.

So the pears that you find in the supermarket tend to be very firm and are rarely ‘ready to eat’.

Choose pears for your baby that have a nice, smooth skin, with no bruises or little holes. Some pears may have brown speckles on the skin – this is known as ‘russetting’ and – as long as it’s not excessive – doesn’t affect the flavour of the fruit in a negative way.

Once home, ripen your pears by placing them in a bowl at room temperature. As the pears ripen, they will probably become lighter in colour. When they are ready to eat, you should feel some ‘give’ when you press them with your fingertips.

Very firm pears can take up to 6 days to ripen fully.

Try putting a banana in the fruit bowl with them, or wrapping them in a brown paper bag.

DON’T refrigerate your pears until they are fully ripe, or they’ll never ripen! But when they ARE ready to eat, putting them in the refrigerator will stop them from ripening any further.

Unlike other pears, Chinese (or Asian) pears ARE ripened on the tree, so they are ready to eat when you buy them (just like apples).

In fact, Chinese pears have the texture of apples, with a taste somewhere between the two!

They are rounder in shape, golden brown in colour on the outside and white on the inside. Like other pears, they are low in acidity, although they are usually a little less sweet. They tend not to discolour as much as other pears when cut.

Because of their firmer, crispier texture, we recommend that you treat Chinese pears in the same way as apples when giving them to your baby (cooking them gently to soften them, for example, if offering them as a finger food).

Do I need to cook pears for my baby?

On the whole, no.

Ripe, uncooked pears are soft and juicy enough to be easily pureed or mashed for babies of at least 6 months of age, or served as a manageable finger food for older babies. They will retain all of their nutrients which may otherwise be lost, to some extent, during cooking.

However, cooking pears softens the fruit by breaking down the cell structures, making it a little easier to digest. It also destroys one of the allergens that – rarely – causes reactions.

Therefore, we recommend cooking pears for babies UNDER 6 months of age, or if the pear itself is too firm to serve raw.

…That the antioxidant properties of pears are at their peak when the fruit is fully ripe.

Do I need to peel pears for my baby?

It is not essential to peel pears for older babies, although the skins should be removed for younger babies who may have difficulties in digesting them, or to whom they may pose a choking hazard.

Some parents prefer to peel pears due to textural reasons – there are woody cells just under the skin that can make pears seem a bit gritty.

On the other hand, many of the nutrients in the fruit are contained in the skin. So it’s always good to encourage your little one to eat the entire fruit – peel and all! – at the appropriate stage.

If you wish to leave the skin on pears for your baby, then we recommend buying organic pears to minimize the risks from pesticides.

If you buy non-organic pears, then we recommend washing them thoroughly under running water, or – to be absolutely sure – peeling them.

Could my baby be allergic to pears?

Any food, of course, has the potential to cause an allergic reaction in a sensitive individual – but allergies to pears are very rare. Nevertheless, you should still introduce pears to your baby with the consent of your doctor and using the four day rule. That way, if pears DO cause an adverse reaction or digestive upset in your baby, you will easily be able to identify them as the culprit.

This link provides more information about pear allergy, which is often associated with birch pollen allergy or – more seriously – with an allergy to peach.

How to cook pears for baby

There are several simple ways in which pear baby food can be prepared if you choose to cook the fruit.

To prevent cut pears from discolouring, dip them into a solution of 1 tbsp lemon juice in 8 fl oz (1 cup) water

How to puree pears for baby

Simply prepare the fruit using one of the methods described above, then place it in a food processor and blitz until smooth – or simply mash the cooked fruit thoroughly.

You can also puree pear by passing it through a sieve.

Remember – you may also puree or mash uncooked, ripe pears for babies of at least 6 months of age.

Can I freeze pear baby food?

Yes, although you’ll need to work quickly to avoid discolouration! You can read more about how to freeze baby food here – and our Homemade Baby Food Accessories page includes some great storage solutions.

Thawed pear can seem a bit runny, as the water tends to separate. A good stir is usually all that’s needed – but, for this reason, we don’t recommend thinning your pear baby food before freezing it.

How to thicken baby food purees

How to thin baby food purees

Hunks of ripe pear can be slippery. To help your baby get a grip, coat them in wheat germ or finely crushed cereal. Alternatively, slice them with a crinkle cutter – those ridges really help! 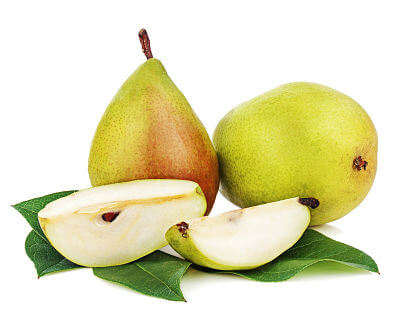 Note: You may need to remove the pear before the apple as – depending on its ripeness – it may soften more quickly.

1 pear (peeled, cored, cut into chunks and placed in a small saucepan with enough apple juice

Quinoa is a highly nutritious grain – and is a rich source of calcium. Of all grains, quinoa has the highest protein content and also contains phosphorus (important for a healthy heart, kidneys and brain), vitamins B and E and iron.

Find out more about quinoa here

2 tbsp mozzarella or other mild cheese

Pear and Banana Muffins (sugar free – ideal from around 12 months+)

1 ripe banana (this provides the sweetness to the muffins, so it is important the banana is ripe)

Please note that this recipe produces muffins that are deliciously dense and moist rather than fluffy and light.