When Can My Baby Eat Raisins? 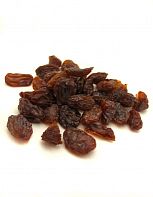 We are often asked whether or not it is safe to give raisins to a baby.

One visitor, from the UK, wrote to us and said

“I’ve heard that raisins are high in iron and I wondered if I could offer them as a finger food?”

Raisins are not usually recommended as a finger food for infants for a number of reasons – and this page looks at the pros and cons of including raisins in your baby’s diet.

Are raisins bad for my baby’s teeth?

There are two schools of thought on this one!

Raisins are high in natural sugars – mainly fructose and glucose – and whilst these are not as harmful to the teeth as sucrose (the type of sugar found in sweets and candy), they are not entirely harmless either.

PLUS, raisins are sticky, meaning they remain in contact with your baby’s tooth enamel for a long period of time.

Traditionally, the advice from pediatric dentists has been to avoid giving raisins to children because they are believed to cause cavities.

The research, paid for by the California Raisin Marketing Board (hmm…) and presented at the American Society of Microbiology found that the main anti-oxidant in raisins is ‘oleanic acid’. This has been found to slow down the growth of cavity-causing bacteria and also prevent bacteria sticking to the teeth.

No studies have conclusively proved that raisins can prevent cavities – then again, no official studies have proved that they cause them, either. This, of course, makes it difficult for us parents to decide what to do for the best!

So – until further research confirms once and for all that raisins are GOOD for the teeth – we would suggest sticking to ‘safe’ foods like pieces of cooked vegetables as frequently offered finger foods or snacks.

Raisins do have lots of redeeming features in the form of nutrients!

Whilst being low in both fat and cholesterol, they are high in potassium and iron. They also contain calcium and fibre (that’s why eating too many raisins can lead to diarrhea) and adding a few pureed raisins to your baby’s food may help relieve constipation.

Raisins can make an interesting addition to certain recipes for your baby from 6 months of age (you’ll come across many recipes on our site that incorporate them). And – of course – adding them to a ‘liquid-y’ dish (like oatmeal, rice pudding, applesauce or even curry) rehydrates them, making them soft and easy to puree.

Another option is to puree them separately and add them into other foods. 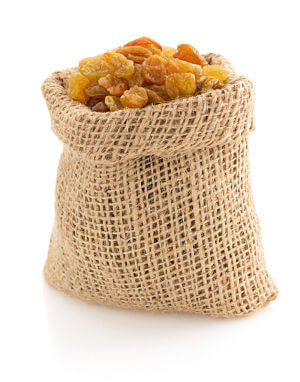 To puree raisins for your baby…

If you will be adding pureed raisins to cereal or another fruit, then you can add a little drop of vanilla essence, too!

Why organic raisins are better for baby

Raisins are, of course, dried grapes. And imported grapes appear on the Environmental Working Group’s list of the ‘Dirty Dozen’ – that is, the 12 foods found most frequently to contain pesticide residues.

A sensible precaution, then, is to only buy ORGANICALLY GROWN raisins to add to your baby’s food.

Additionally, organically grown raisins do not contain preservatives known as ‘sulfites’, which are used to maintain the raisins’ colour and can cause adverse health reactions in a small percentage of the population (particularly among asthmatics).

Sulfur dioxide is used in the production of golden raisins, but is not allowed in ‘Certified Organic’ products – so organically grown golden raisins are quite difficult to find. And if you DO come across them, they’ll probably be a lot darker in colour than you’re used to!


A sugar free treat with raisins… 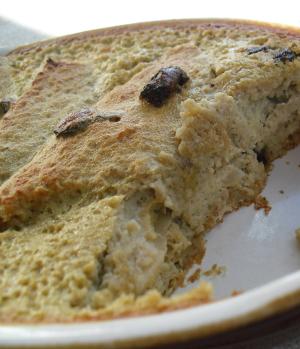 Great for dessert or breakfast!

When can my baby eat…