It’s really heart-breaking when diaper rash causes the skin on your little one’s bottom to become red and angry, causing HIM great discomfort and making diaper-changing time miserable for you both.

There are many possible reasons why your little one may experience diaper/nappy rash, including… 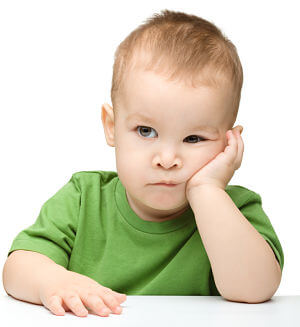 However, one of the most common causes of diaper rash in babies from around 4-6 months onwards is the introduction of solid foods… and certain foods in particular.

If your little one is suffering from a diaper rash – and you are fairly certain that none of the above causes are responsible – then it’s time to take a look at his diet.

Please note: You should have the rash checked out by a doctor if you are unsure of its cause, particularly if it is very severe or persistent/worsening.

It is particularly important to consult a medical professional if the rash involves any boils/blisters, spreads beyond the diaper area, discharges pus, or is accompanied by a fever.

When your little one starts solid foods for the first time, the texture and composition of his stools changes. So may the frequency with which he passes them. These factors alone can trigger a rash in some babies.

Acidic foods are very often the culprits when nappy rash appears. Common acidic foods (which you may wish to exclude from his diet should a rash develop) include

In some cases, sensitivity to certain foods may cause a red circle around the anus rather than a more widespread rash across the cheeks of your baby’s bottom.

This may indicate a food allergy, although not ALL diaper rashes as a response to certain foods indicate a true allergy… it may simply be that your baby’s digestive system is unable to cope with those particular foods at that time.

You should, of course, consult your doctor if you ever suspect that your baby is experiencing an allergic reaction to a particular food.

Because diaper rash may be triggered by frequent, loose stools, it is a good idea to avoid the foods that cause diarrhea, such as

Other foods that may cause nappy rash include wheat cereals such as Cream of Wheat and Weetabix – and foods containing artificial sweeteners (another good reason to avoid those!).

If you are breastfeeding your baby…

…and he has persistent diaper rash despite eliminating the problem foods mentioned in the lists above, it’s worth looking to your OWN diet. It may be that your baby is reacting to those foods as they pass to him through your breast milk.

Useful link for more information – Diaper Rash – by the MayoClinic.com