How to prepare spinach

How to prepare spinach

Welcome to our Spinach Baby Food Recipes section, where we look at how and when to introduce spinach to your baby and explain why spinach may not be the best choice for your little one as an early weaning food.

Spinach contains a broad range of nutrients including 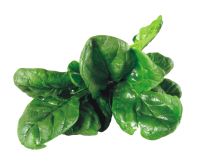 It also has powerful anti-oxidant properties and can help protect the body against various types of cancer. What’s more, consuming spinach is believed to help lower blood pressure and guard against age-related brain decline in later life.

The calcium and iron in spinach are NOT well absorbed by the human body. This means that spinach may not be NOT the best source of these nutrients for your baby, even though the levels of iron and calcium it contains are quite high.

The problem is caused by the oxalates in spinach, which bind to the iron and calcium, inhibiting their absorption by the body.

Could spinach REALLY have given Popeye his powers?

Those of us who grew up watching the spinach-guzzling sailor on TV couldn’t help but believe that spinach was a wonderful, iron-rich food that would give us amazing strength and power!

The truth, however, is that the wonders of spinach portrayed in the cartoon were based on statistics published back in 1870, which were based on poor scientific research, and very inaccurate.

To boost his iron levels, Popeye may have done better eating red meat, chicken or even tuna, from which the iron is much more easily absorbed!

You should – of course – speak to your doctor before introducing spinach to your baby.

However, most sources will suggest waiting until your little one is at least 10 months of age to introduce spinach.

In part, this is due to the fact that spinach may be high in nitrates, which may intensify during storage and subsequent reheating.

The American Academy of Pediatrics states in its article Infant Methemoglobinemia: The Role of Dietary Nitrate in Food and Water that homemade spinach baby food should not be given before 3 months of age, which they acknowledge is earlier than solids need to be introduced anyway!

But – if you’re still concerned about nitrate levels in spinach – you can further minimize the risk by discarding any water in which you cook the leaves and preparing spinach as needed, rather than cooking it and storing it for future use.

The other reason that spinach is not commonly recommended as an early weaning food is that your baby’s body may have difficulty in absorbing the iron and calcium it contains (as mentioned in the Nutrition Facts above).

Although you can boost your baby’s absorption of the iron by serving spinach alongside foods containing vitamin C, it is far better to look for alternative food sources to ensure that your baby receives sufficient amounts of these vital nutrients.

There is also some research to suggest that the oxalates in spinach may even inhibit your baby’s absorption of calcium from his milk, if the two are served together.

Spinach, therefore, should not be given to your baby on an overly frequent basis once it’s introduced – and, when offering spinach to your baby for the first time – remember to follow the four day rule and watch carefully for any sign of allergic reaction or digestive discomfort.

Spinach, which is related to chard and beets, is separated into three main types –

If you have the option, then pick semi-Savoy over Savoy, because the leaves are easier to clean!

Look for spinach bunches that have tender, fresh, vivid green leaves – if the leaves are yellowing, then they are old and subsequently less nutritious.

We recommend that you choose organic spinach for use in your baby food recipes.

Conventionally grown spinach now ranks #2 on the Environmental Working Group’s ‘Dirty Dozen’ – the fruits and veggies most likely to be high in pesticide residues.

Keep your spinach in a plastic bag in the refrigerator crisper, where it should last for around 4 days (although it’s advisable to use it as quickly as possible to make the most of its nutrients).

Don’t wash it before you store it, as this will make it deteriorate more quickly.

How to prepare spinach for your baby food recipes

Spinach needs to be washed VERY carefully – even if you buy it pre-packed in a bag that states its ‘washed and ready to eat’.

Many of us will clearly remember the huge 2006 recall of spinach in the US connected to an outbreak of E.coli, during which several people died.

Since then, safety standards have been tightened considerably and spinach samples are now tested before reaching the consumer in order to prevent such a catastrophe from occurring again.

Still, thorough washing of all vegetables and fruits is always a good idea!

Is to completely submerge the leaves in a bowl of water and use your hands to ‘swish’ them around, dislodging any dirt. Then you should drain the leaves and refill the bowl with fresh water, repeating the process until the water in the bowl looks clear.

To cook spinach for your baby… 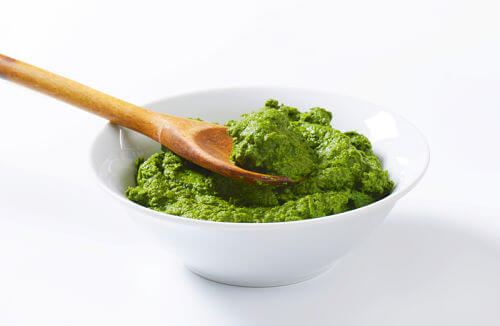 *Some parents prefer to delay using egg white in their baby food recipes until at least 12 months of age.

The tomatoes in this recipe contain vitamin C, which will help your little one absorb a little more iron from the spinach.

pinch each of the following:

chili powder (optional – but some babies love it!)

*Some parents prefer to delay using egg white in their baby food recipes until at least 12 months of age.

A sweet and savory combo, packed with nutrients!

Tips for introducing meat to baby

Iron supplements for infants – are they necessary?

How to freeze baby food