With these barley baby food recipes and tips for introducing barley to baby, you’ll discover how easy it is to include this nutritious grain into your baby’s diet. 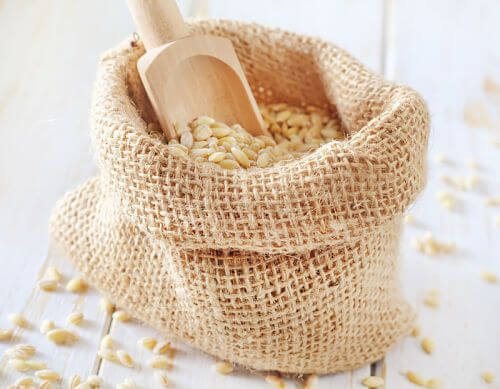 Why barley is good for your baby

It may be a somewhat unfashionable food these days, but barley is one of the most nutritious grains out there!

Eating barley is believed to help regulate blood sugar, lower cholesterol and prevent heart disease and certain types of cancer. Interestingly, research has shown that it is also useful in protecting against childhood asthma.

It contains amino acids, lots of fibre (ounce for ounce, three times as much fibre as oatmeal), B vitamins, iron, selenium, copper, manganese and phosphorus.

When can my baby eat barley?

Barley contains gluten, the protein which gives it its chewy texture and which is also contained in wheat and rye. Many experts recommend waiting until baby is around 6 months of age before introducing gluten.

For this reason, it’s best to wait until your baby is at least 6 months old before introducing barley.

You should never offer it as a ‘first’ food to your baby if there is a family history of Celiac disease.

You should also be extra careful about introducing barley if your baby is allergic to wheat, as there may be a relationship between barley allergy (which is quite rare) and wheat allergy.

Remember – you should always discuss the introduction of ANY new foods with your child’s doctor, as there may be a specific reason why a particular food isn’t right for him.

Making barley baby food – What are the different types of barley?

Barley is sold in various forms, some of which are more nutritious than others!

Pearled barley tends to be widely available in grocery stores but – for the more nutritious varieties – you may need to visit your local natural health store.

Barley is often sold loose, in bulk bins. If you buy barley from bulk bins, make sure it’s from a store that’s busy – this will ensure that the stock gets rotated frequently and the barley hasn’t been sitting there for weeks on end! Check, too, that the bins are hygienically covered.

Keep your barley in an airtight container at home. If you buy hulled or pot barley, you should keep it in the fridge. This is because it contains the oily germ, which may turn rancid in warm conditions.

How to cook barley for your baby

If you buy pre-packed barley, there will usually be cooking instructions provided on the packaging.

Otherwise, the general rule is to use one cup of barley to 3 cups of water.

Just bring the water to a rolling boil, add the barley, bring the liquid back to the boil, then lower the heat and simmer.

A little barley goes a long way… 1 cup of uncooked barley produces around 3 to 4 cups cooked!

Want your baby’s barley to cook faster AND be easier to digest?

Then try soaking it first, which not only increases its digestibility but also makes its nutrients more ‘bio-available’ (easy for the body to absorb).

To do this, place the desired amount of barley in a bowl and cover with twice as much water (i.e. one cup of barley to 2 cups of water). Leave to soak for several hours (or just leave it overnight), then drain and rinse.

If you don’t plan to cook with it straight away, then put it in a covered container and store in the fridge for up to 2 days.

Barley has a yummy, almost nutty flavour and you can add it to lots of different baby food dishes, immediately boosting their nutritional value.

It’s incredibly versatile and can be used to make breakfast (recipe below), savoury dishes or even dessert!

You can easily add it to soups and stews, making them more satisfying as well as more nutritious, or you can simply serve it as a side dish instead of rice or pasta.

*You can grind barley in a good food processor, or with a grain grinder. We find that grinding in small batches gives a better result.

An alternative to grinding the barley is to simply cook it in the regular way, then place the cooked barley in a food processor and blend with enough breast milk or formula to give the desired consistency.

However you cook it, stirring in some mashed banana will sweeten the barley – you can also try mixing it with other fruit purees and finishing with a nice blob of homemade yogurt for extra creaminess!

2 small carrots (peeled if not organic) and sliced

4 oz (1/2 cup) barley – you can use pearled, but hulled would be better if available

Toss the cubed lamb in the flour until thoroughly coated.

Using stock in this recipe instead of water gives the barley a slightly different taste, which might appeal to your baby more than ‘regular’ barley!

Serve ‘as is’, or blend the mixture in a food processor for a smooth, creamy and nutritious treat. 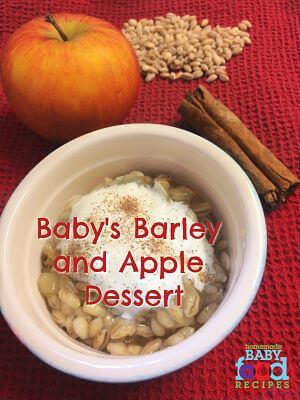