Well, chunks of fresh coconut are clearly more than your little one’s gums can handle!

However, there ARE ways to include nutritious coconut in its various forms into your baby’s diet… and we’ll show you how!

I thought babies were not allowed to have nuts! Isn’t coconut a ‘nut’?

Actually, the true classification of coconut seems to be a matter of some debate!

Many people say that coconut is a seed (in fact, it IS the largest seed in the world) and others describe it as a fruit (indeed, coconut IS the fruit of the coconut palm).

Technically, its closest relations are fruits like cherries and peaches (known as drupes). Because coconut is rather less juicy than other drupes, it is known as a ‘dry drupe’ or ‘fibrous drupe’. 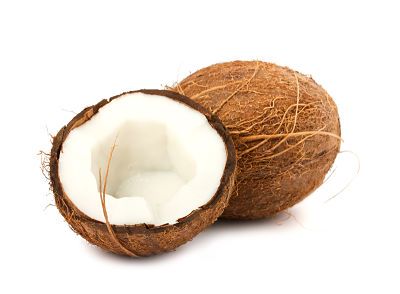 However, the FDA is now including coconut on its list of ‘tree nuts’, meaning you should not give coconut to your baby if he has been identified as having a tree nut allergy.

Yet – according to the Food Allergy and Anaphylaxis Network – allergic reactions to coconut are quite rare and the majority of the individuals reported as having experienced them were not allergic to other tree nuts.

This seems to show that the affect of coconut on the body may not be the same as that of the ‘typical’ tree nut. Indeed, the creator of the website www.allergicchild.com states:

“…The coconut is in the palm family, and while it is possible to be allergic to coconut… it doesn’t cross react with tree nuts. Our son tolerates coconut without a problem. Yet coconut has been determined to be a tree nut by the FDA for purposes of labeling! Food that includes coconut will likely have a label stating that the product includes Tree Nuts.“

As always, the most prudent option is to check with your doctor before giving coconut to your baby.

With your doctor’s consent, you can begin adding coconut products to your baby’s recipes once he is safely enjoying other fruits and vegetables.

To be on the safe side, however, do NOT introduce coconut at the same time as other new foods. That way, it it DOES cause any unwelcome reaction – you will easily be able to identify it as the culprit.

NOTE: There may be an association between coconut allergy and an allergy to latex. If your baby is allergic to latex, then be sure to mention this to your doctor when discussing the introduction of new foods.

Is coconut a healthy food?

You bet! In some parts of the world, where coconuts grow in abundance, they are a staple food – packed with nutrients and credited with many health promoting properties.

This interesting site summarizes the many lists many benefits of eating coconut in its various forms and provides links to research supporting these claims.

Experts used to believe that coconut is too high in unhealthy fats to be considered a useful addition to the diet – but more recent research has suggested that the fat in coconut is actually very good for us!

This is because it is high in lauric acid, which also happens to be the main fatty acid found in breast milk.

Lauric acid is what makes breast milk so digestible and is believed to protect the body from infection and boost the immune system.

Organic, hand pressed or extra virgin coconut oil is considered by many to be the healthiest type of dietary oil (this does NOT apply to refined coconut oil, which is the type more commonly found in stores).

At room temperature, coconut oil is solid – making it a very healthy alternative to margarine or butter.

use coconut in this yummy soup... 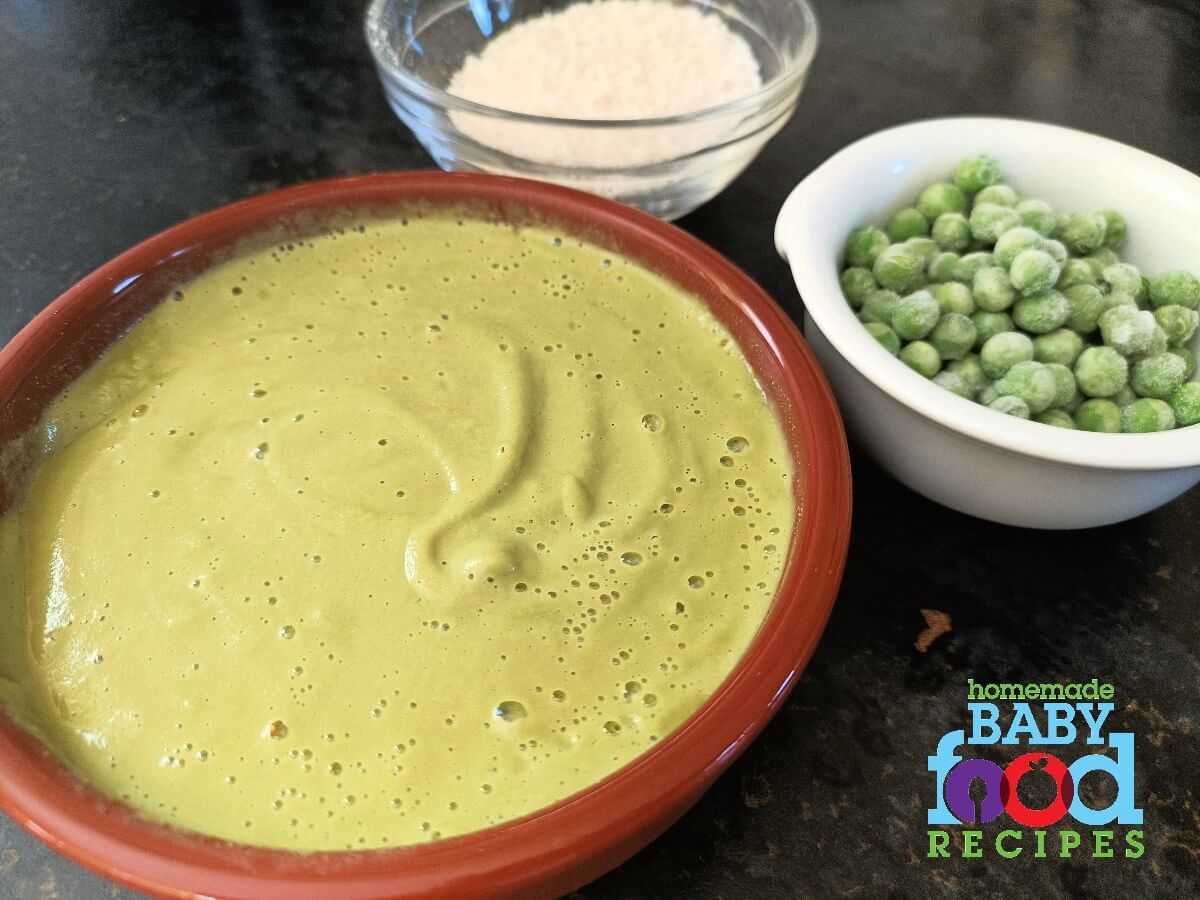 Tasty enough for the whole family to enjoy!

What is coconut water?

When you pick up a whole, fresh coconut and shake it, you should hear a lot of liquid sloshing about!

That liquid is coconut water (not, as many people believe, coconut milk).

Until the coconut is opened, its water is completely sterile – in fact, it’s reported that during the Second World War, the water of young coconuts was used as a glucose supply for injured soldiers when no sterile glucose was available!

After checking with your doctor, why not try giving your older baby a drink of fresh coconut water – it certainly makes a healthy alternative to many commercial juices!

NOTE: Fresh coconut water should be refrigerated and used within 24 hours.

Coconut milk and coconut cream are available – usually unsweetened – in most supermarkets around the world.

Coconut cream is generally used in dessert recipes, whereas coconut milk has many culinary uses!

If you want to use coconut milk in your baby food recipes, then make sure it is unsweetened and has had nothing else added to it.

Better still, make your own coconut cream or coconut milk from fresh coconut – it’s VERY easy to do!

Choose a good coconut. It should be dark brown in colour and full of coconut water.

If it feels as if there is not much liquid inside, then the coconut itself is probably cracked. Not only will you have lost some water, but the coconut may have begun to rot inside.

Open the coconut (you’ll find some tips to help you here), then grate the flesh. It is not essential to remove the brown skin (which is a great source of fibre), but you may if you prefer!

A coarse hand grater is, we find, the most effective tool for shredding coconut.

Cover the grated coconut with boiling water and allow to sit for 15 minutes.

Place a fine mesh strainer or a damp piece of muslin over another bowl and strain the coconut through it.

If using a mesh strainer, push down hard on the coconut with the back of a spoon to get out all of the liquid. If using muslin, gather it up and squeeze as hard as you can!

The resulting liquid is coconut cream, which should be rich and thick, with a strong flavour.

Placing this liquid in the refrigerator causes any thinner liquid (coconut milk) to separate from the cream – you can then spoon the thickest part off the top.

Don’t throw the drained coconut away – just repeat the entire process and this second press will give you pure coconut milk!

Another (quick) method is to cut a fresh coconut into small pieces and place them in a food processor.

Then, cover them with boiling water and process at high speed.

Finally, strain the mixture through a fine mesh strainer to remove any remaining little pieces… and refrigerate!

Harder to find in the stores – but very yummy if you CAN get them – are the very young coconuts known in some areas as jellied coconuts.

They tend to be more commonly available in health food and natural food stores and are usually sold in the husk. You will find them in the chiller and need to keep them refrigerated once you get them home.

When you open one of these coconuts, you will find that the coconut ‘meat’ is very soft and gelatinous (hence the name) and sweeter than mature coconut. It can easily be pureed and added to your baby food recipes to give them a delicious tropical twist!

“The first solid food eaten by a Thai baby is three spoonfuls of the custard-like flesh of young coconut fed to him or her by a Buddhist priest.”

Taken from… Young Coconuts – a Fountain of Youth (External link)

If you can’t easily obtain fresh coconut, then dried (desiccated) shredded coconut may make an acceptable alternative. You can even use it to make coconut milk, following the steps we described earlier.

However, you do need to check the packaging carefully, as dessicated coconut is often sweetened and, therefore, unsuitable for your baby.

You should also make sure that any dried coconut you buy contains no other added ingredients – pure, unsweetened desiccated coconut can usually be found in health and natural food stores.


a sweet treat for your tiny diner... 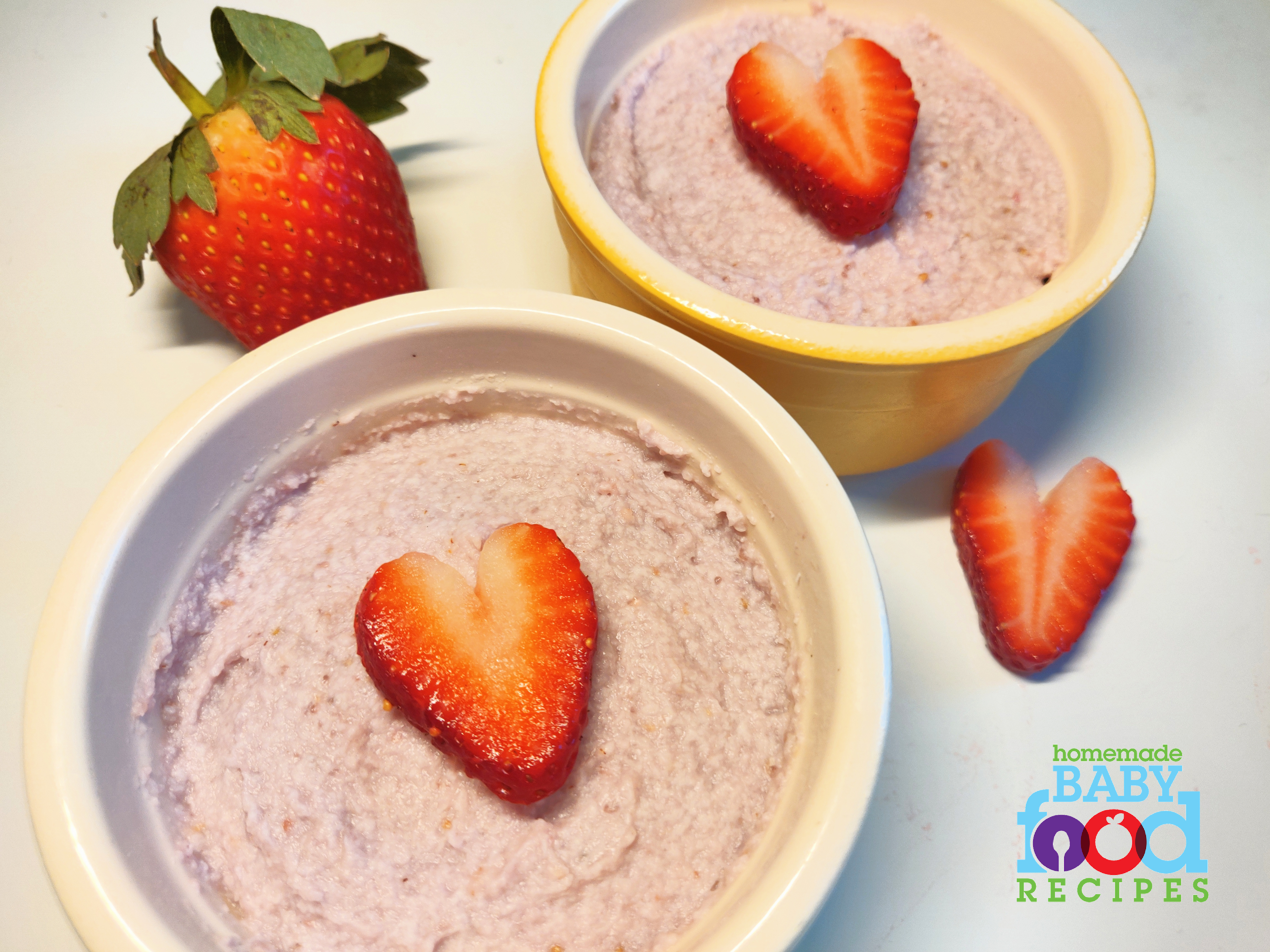 Soft, fluffy and made with coconut cream

Please note: This recipe DOES contain onions, mild spices and lentils. If your baby has a delicate tummy, delay the introduction of this recipe until later in his first year.

1 tbsp raisins, soaked in warm water or apple juice to soften them

Preparation couldn’t be easier – just place all ingredients in a food processor and blend until smooth!


A sugar free treat made with coconut milk… 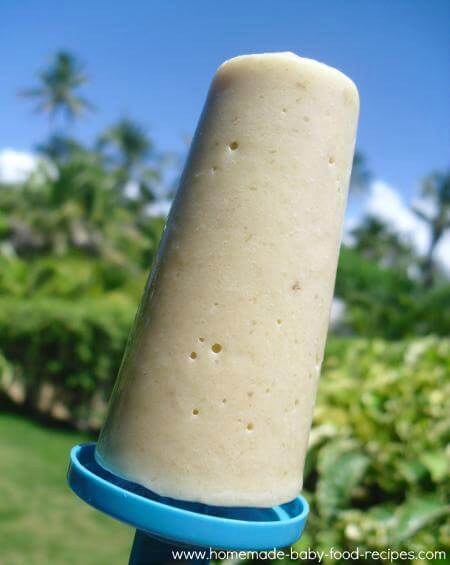 Should I peel fruits and vegetables for my baby?