Some parents are unsure about preparing bell peppers for baby. Yet these colourful, delicious and nutritious vegetables are an ideal addition to your baby’s diet – and we’ll show you how to prepare them in ways he’ll enjoy! 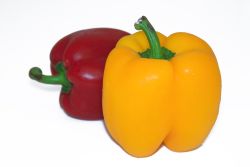 PLEASE NOTE: The information provided here is meant as a guide and does not replace professional medical advice. Please speak to your child’s doctor before introducing ANY new foods and be sure to apply the four day rule as you include each new food in your baby’s diet.

Preparing bell peppers for baby – more about this amazing vegetable

Bell peppers are known in different parts of the world by a variety of names. They are sometimes called sweet peppers, capsicums, pimentos or – in some midwestern parts of the United States – mangos!

The word “pepper” instantly makes you think “hot” – but bell peppers are the ONLY type of peppers that don’t contain capsaicin (the substance that makes all the others hot).

Bell peppers come in a variety of colours, including green, red, purple, yellow and orange!

This, of course, makes them a very visually appealing vegetable to babies!

The colour of a bell pepper depends on the stage of ripeness and the variety of the plant.

Did you know, for example, that a green bell pepper is just an immature red pepper?

The flavour of a bell pepper changes as it ages, becoming more subtle and sweet. This is why red peppers are sweeter and less bitter than green ones!

Bell peppers contain folate and are a good source of vitamin A (from beta-carotene), vitamin B6 and vitamin C.

In adulthood, it is believed that bell peppers protect the body against rheumatoid arthiritis and may also prevent the development of cataracts.

Red peppers have the edge on green ones in terms of nutritional value, as they contain more folate, an impressive nine times more beta-carotene and lots of lycopene.

Lycopene is an important carotenoid and plays a valuable role in later life, by protecting against cancer and heart disease.

Bearing in mind this array of health benefits, it’s a good idea to establish a love and appreciation of bell peppers from an early stage!

Buying and storing these colourful vegetables

The FDA recommends washing or peeling vegetables in order to remove pesticide residues.

But because bell peppers are so commonly found to harbour them, many people prefer to stick to the organically grown varieties.

When you are choosing bell peppers to cook for your baby, look for ones with bright, deep colours and fresh, green stems.

Avoid those with wrinkled or blemished skin. Don’t worry about the shape, though – it doesn’t affect the quality or taste in any way!

To prepare a bell pepper, wash it well then remove the stem by cutting around it with a paring knife.

Next, halve it lengthwise and remove the core and the seeds. You can then cut it into chunks, strips or dice, according to your recipe.

Alternatively, you can cut bell peppers into rings by slicing them horizontally – or simply clean out the seeds and leave the rest of the pepper intact for stuffing. 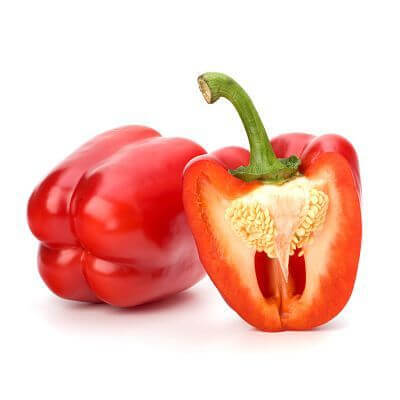 As mentioned earlier, red bell peppers are sweeter – and more nutritious – than green, making them an ideal choice for baby. Yellow and orange peppers also have a nice, sweet flavour.

You can begin including cooked bell peppers in your baby’s diet from 6 months of age (with your doctor’s consent), remembering to watch carefully for any signs of allergic reaction or digestive problem.

In our opinion, there is nothing to compare with the delicious flavour of a roasted red pepper – and it’s so simple to prepare!

To roast a bell pepper...

The next step is to remove the skin…

This is very easy to do – just pop the cooked pepper into a sandwich bag and leave it to sit for 10 minutes.

When you come back, the skin will slip right off. You can then split the pepper and easily remove the seeds, then put it into a blender and puree it.

NOTE: Some parents prefer to wait a little longer before introducing eggplant – please see this page for more information

2 oz uncooked pasta (something like rigatoni is ideal, because the tubes tend to hold the sauce – perfect if your baby likes to eat pasta with his fingers!)


We hope your little one enjoys these delicious red pepper baby food recipes – and if you have any ideas of your own for preparing bell peppers for baby, then please contact us and let us know!

Differences in Folate Content of Green and Red Sweet Peppers

University of the District of Columbia – What’s So Great About Peppers?

MailOnline – Why The Pepper is Worth Its Salt

Introducing corn to your baby