We'll also take a look at how buckwheat is considered an 'emerging allergen' in some countries and why it's important to talk to your doctor before introducing it to your baby.

The benefits of buckwheat for baby

When to introduce buckwheat

How to cook buckwheat for baby

The benefits of buckwheat for baby

When to introduce buckwheat

How to cook buckwheat for baby

Important note: The information given on this page is meant as a guide and does not constitute medical advice. Please speak to your doctor before introducing any new foods to your baby, or if you have any concerns.

You might be forgiven for thinking that buckwheat is a kind of - umm - wheat!

But you'd be wrong... and just to make matters even MORE confusing, it's not even a type of cereal (even though we've listed it as one here on our site)!

Buckwheat is, in fact, a fruit seed!

It's not related to wheat in ANY way (because it's not a type of grass). Neither is it a grain.

But it IS known as a 'pseudocereal', because it's composed of complex carbohydrates just like other cereals, and because it's usually cooked in the same way as cereal, too.

Other pseudocereals include amaranth and quinoa. 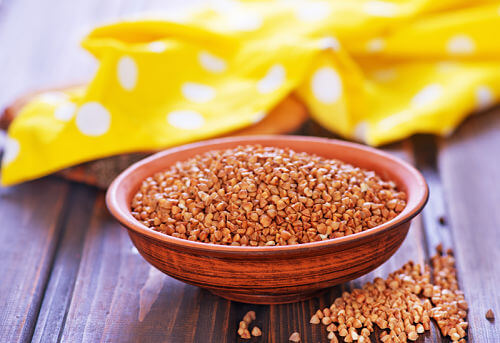 Maybe the most widely available form of buckwheat is buckwheat flour, which is popular because it is both wheat- and gluten-free.

This makes it ideal if you baby needs to follow a wheat- or gluten-free diet (learn more about introducing wheat and gluten to your baby).

The flour is perfect for making buckwheat pancakes, which are a little 'heartier' in texture than traditional pancakes.

Note: Even though buckwheat is wheat-free and gluten-free, products containing buckwheat may still be contaminated by these allergens, especially if they are made in facilities that process multiple grains.

You can also buy raw buckwheat groats, which are pale yellow/green in colour and have a very delicate, subtle flavour.

Toasted buckwheat groats are dark brown in colour and have a nutty, almost bitter flavour.  They are better known as 'Kasha'.

Buckwheat is used to make noodles, too.

Soba, for example, are thin Japanese noodles make from buckwheat (although they may sometimes be mixed with actual wheat, too - so be careful if you are trying to avoid wheat).

Buckwheat flour should always be kept in the fridge.

The groats should be kept in a cool, dry place - but if you live in a warm climate (or you like to keep your home toasty!), then we'd recommend storing buckwheat groats in the fridge too!

Stored properly, they will last for up to a year.

The Benefits of Buckwheat for Baby

Buckwheat is becoming more and more popular as a healthy food.

This is, in part, due to the fact that there is a growing trend to avoid wheat and gluten.

But buckwheat is more than just a gluten-free alternative to wheat - it's actually a great source of a wide variety of nutrients.

Whilst it contains plenty of carbohydrates, buckwheat is an especially good source of high-quality protein.

It contains all of the 'essential' amino acids, which are known as 'essential' because the body cannot make them and they have to come from the diet.

Buckwheat isn't particularly rich in vitamins - but it provides more antioxidants than cereal grains like rye, oats, barley and wheat.

The good news is that our bodies are able to absorb the minerals from buckwheat very efficiently - more efficiently than from many grains.

This is because grains contain something called 'phytic acid', which slows down mineral absorption.

Fortunately, buckwheat contains little phytic acid in comparison. This makes it a healthy food choice and a desirable part of your baby's diet! 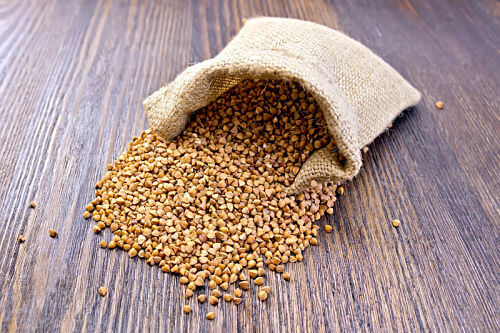 You will often see buckwheat described as non-allergenic, and therefore completely safe for babies.

This, however, may be misleading - and it is important to talk to your doctor before introducing buckwheat to your baby.

As we mentioned earlier in this article, buckwheat contains neither wheat nor gluten, so it may be a good choice for parents who need to avoid them.

But buckwheat CAN cause allergic reactions, sometimes serious.

At the moment, buckwheat allergy is considered relatively rare in the United States and many parts of Europe. But this may be because - up until fairly recently - people in these areas didn't eat buckwheat very often.

In Asia, where buckwheat is eaten on a regular basis, the story is quite different.

Buckwheat is the sixth most common cause of food allergy in Japan.

In fact, Japanese food manufacturers are required by law to state on their packaging whether or not the food contains buckwheat. This highlights just how much more prevalent the allergy is.

Some experts believe that it is likely the number of reported allergic reactions to buckwheat will increase in the US and Europe as its reputation as a 'superfood' begins to spread.

A British study found that buckwheat is now contained in many 'Free From' ranges - these are products like pasta and bread that are popular because they are wheat and gluten free.

Unfortunately, food producers in the US and in many parts of Europe are not yet required to highlight buckwheat as a potential allergen on their products.

If your baby is allergic to buckwheat, it's important to be aware that it is an 'undeclared allergen' in many food products, including pizza dough, pasta and bread.

It is also appears in many foods sold in Polish supermarkets.

Some brands known to contain buckwheat include Belvita and Ryvita Multi Grain.

the symptoms of buckwheat allergy

Buckwheat can trigger a very severe reaction called anaphylactic shock, which can be life-threatening.

It is important to seek medical help if you think your baby is showing signs of an allergic reaction to buckwheat.

who is most at risk of buckwheat allergy

It is always important to discuss the introduction of new foods with your doctor if your baby has a family history of food allergy, as it may increase your baby's risk.

There are additional factors that may make an allergic reaction to buckwheat more likely.

When to introduce buckwheat to baby

As with all new foods, it's important to discuss the introduction of buckwheat with your child's doctor, particularly if he has any existing food allergies, or if there is a family history of allergy.

With your doctor's consent, we'd recommend introducing it from around 7 to 8 months of age.

How to cook buckwheat

Buckwheat is quick and easy to cook. It's also versatile and can work well in both sweet and savoury dishes. You can use it to make fun finger foods too!

The following instructions work for raw buckwheat groats, or for toasted buckwheat (kasha).

If you have raw groats but want to achieve a richer taste, simply toast the groats for several minutes in a dry pan, before following the steps below.

TIP: If you want to use the cooked buckwheat as a porridge, use 3 parts liquid instead of 2. This will provide a runnier texture. You can also try using milk instead of water, for a creamier result.

You may notice that the instructions on the packet are different to this.

The brand of buckwheat we buy recommends simmering it for 30 minutes. By the end of the cooking time, the groats are incredibly mushy!

If you WANT the texture to be mushy and you think your baby will prefer it that way, then by all means cook it for longer.

If you prefer a little more texture, then cook for a shorter time and drain any liquid that remains in the pan.

How to keep the 'grains' separate

Our little man didn't like his buckwheat to be mushy - he liked it better when the grains were distinct and separate.

The easiest way to achieve this is to use a beaten egg.

The egg creates a glossy coating that stops the groats from sticking together. Once they are properly coated, you can add the liquid and cook your buckwheat as usual, following the directions above.

TIP: Start this recipe a day ahead!

1 cup milk (use breastmilk or formula if you prefer)

This recipe is lovely served warm or cold. You can also try adding other fruits - chopped strawberries taste amazing!

1 cup milk (use breast milk or formula if you prefer)

*If you are in a cold room/climate, the coconut oil may be solid. If so, warm it gently until it has melted before stirring it into the milk mixture.

These make a great breakfast and they freeze well too!

TIP: Start this recipe a day ahead!

These little patties are firm on the outside and soft on the inside. They're ideal for older babies who are biting and chewing well.

1 tsp mild curry powder (this is optional, but provides a lovely, aromatic flavour)

1/2 tsp each of turmeric and paprika

This dish tastes wonderful topped with a sprinkle of Parmesan cheese.

If you decide to save some to reheat later, add a little extra broth or water to loosen the mixture up again. 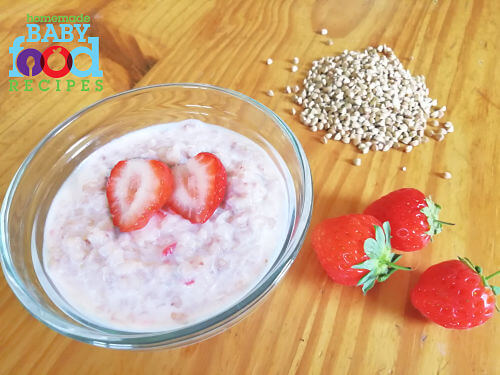 The Contribution of Buckwheat Genetic Resources to Health and Dietary Diversity