Should I Peel Fruits and Vegetables For My Baby?

We are often asked whether or not it is necessary to peel veggies and fruits to be used in baby food.

Here we answer your questions and give you some food for thought!

There are several reasons why you might want to consider peeling fruits and vegetables for your baby. 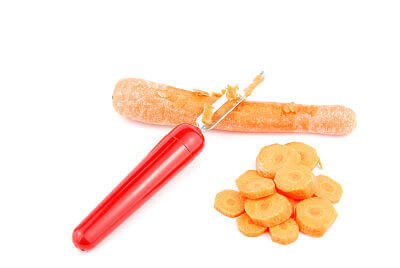 Let’s look at each issue in a little more detail…

As with many aspects of infant nutrition, this depends on the individual.

In some cases, consuming the peel of a food can cause an upset tummy.

It is also possible that fruit or vegetable peel could trigger an allergic reaction in a sensitive baby, as the allergenic potency of some foods (including apples and peaches) is higher in the peel than the flesh of the fruit.

Yet many babies will eat fruit and veggie skins with no problems whatsoever!

Our advice (with your doctor’s consent) is to carefully monitor your baby’s reaction to a food both with and without the peel.

So, when you first introduce a new fruit or vegetable to your baby, peel it before you cook or serve it.

Once you are confident that the food agrees with your baby, then you can try cooking it UNpeeled.

As long as you don’t introduce any other new foods at the same time, you will easily be able to spot if leaving the peel on caused a problem for your baby.You can then try again when his digestive system is a little more mature.

If you choose to introduce solids to your baby before the recommended age of 6 months,then we would suggest peeling all fruits and vegetables before you cook them.

They may find it too strong, or bitter – in which case you should, of course, remove it from the foods you serve to them.

Try again from time to time, though – fruit and vegetable peel is very nutritious!

Do bits of peel present a choking hazard?

Peeling fruits and vegetables for your baby DOES minimize the risk of choking.

If you puree unpeeled produce for your baby, it can be hard to get it completely smooth and little bits of peel may remain. These shouldn’t really present a problem as far as choking is concerned – larger pieces of peel, however, may be more hazardous for younger babies.

We would certainly recommend removing the peel from foods that are to be pureed for very young babies, or ensuring that the puree is very fine and that the pieces of peel are small.

Until you are completely confident about your baby’s chewing abilities, you should also peel items that are to be given to your baby as finger foods.

Many fruits and vegetables are waxed to preserve their freshness and make them appear more inviting!

Various waxes are used, including beeswax, carnauba wax, shellac and (less desirable) food-grade petroleum based waxes. Sometimes, synthetic resins and fungicides may be added to these waxes.

Although waxing is approved by the FDA, it’s a good idea to avoid using waxed fruits and veggies in your baby’s diet, thereby protecting him from unnecessary synthetic additives and possible digestive problems.

Wax is not easily removed by washing – therefore, the best option is to peel produce that has been waxed (ensuring that you only remove a thin layer of skin, which will preserve the nutrients that lie immediately below it).

The items most commonly waxed are

Producers are required by the FDA to label waxed fruits and veggies, showing which type of wax has been used.

But – to be sure of avoiding wax altogether – buy organic produce.

Organic fruits and vegetables are rarely waxed and – if they are – the wax should be natural (such as carnauba wax, which comes from the leaves of a palm tree).

Pesticide residues on your baby’s fruits and vegetables

What a horrible thought!

Yet the fact is that the skins of many produce items DO harbour hazardous pesticide residues.

A 1996 report ‘Pesticides in the Diets of Infants and Children’ by the National Academy of Sciences confirmed that both the severity and nature of health risks to infants from pesticides differ from those to adults.

The problem is compounded by the fact that babies tend to eat a lot of the same TYPE of produce – meaning that they may regularly be exposed to the same type of pesticide.

But this does not mean that you should avoid fresh fruit and vegetables in your baby’s diet.

The benefits of a diet rich in fresh produce far outweigh the risks.

Instead, you should take precautions to eliminate – or at least minimize – these risks.

Peeling fruits and vegetables is the most obvious preventative measure – some experts claim that up to 99% of pesticide residues can be removed in this way.

According to the Environmental Protection Agency (EPA), most pesticide residues remain on the skin of produce items and do not penetrate into the food.

Food safety recommendations from the FDA also include removing the outer leaves of items like lettuce and cabbage.

The UK’s Food Standards Agency, however, states that peeling fruits and veggies to remove pesticide residues is NOT necessary in the UK (although we’ll leave that up to you to decide!).

To some extent, it will.

Whilst pesticides are mainly concentrated in the skin, so are vitamins, nutrients and fibre!

So what is the alternative?

The FDA and the UK’s Food Standards Agency suggest washing produce as an alternative to peeling.

If you choose to do this, then you should wash and scrub items thoroughly under warm, running water (warm water removes pesticide residues more efficiently than cold). There are special “produce washes” that you can buy to help you – but never use regular soap, as it could cause health problems for your baby.

Soak delicate items like strawberries, then rinse them, as they are difficult to scrub clean!

Systemic pesticides can’t be washed – or peeled – away

Whilst most official recommendations for removing pesticide residues include peeling or washing produce, few address the problem of systemic pesticides.

These types of pesticides are often applied to the roots or soil of crops and are then “taken up” by the entire plant. Their purpose is to destroy pests as they attack the crop tissue… the problem is that you cannot remove the residue.

The safety of systemic pesticides in our food is – of course – a matter of controversy.

It may cost a little extra, but for peace of mind it is well worth buying organic produce for your baby.

It is not essential to peel organic produce when you prepare baby food, neither are you faced with possible contamination by systemic pesticides. And – of course – organic fruits and veggies often taste far better than their non-organic counterparts.

IMPORTANT NOTE: ANY fruits or vegetables that you plan to give your baby should be washed – whether or not you are going to peel them and whether or not they are organic.

Because bacteria may be present on the skins of any produce items (organic foods may be contaminated by organic fertilizers, for example).

You should also wash foods like bananas – even though the peel isn’t eaten. Just imagine that the skin is contaminated with bacteria. Your baby will handle the skin, spreading the bacteria to the fruit itself – and to his mouth.

Ensure that your produce is certified organic (or 100% organic)

Anything less and the risk of pesticide residues may still exist. The farming requirements for certified organic produce vary around the world, but generally demand that no synthetic chemicals are used as the crops grow, or have been used on the same soil in the past (usually up to 3 years).

Other tips to minimize risks to your baby from pesticide residues

Certain fruits and vegetables have been identified as containing the highest concentration of pesticide residues, and have been nicknamed “the Dirty Dozen”…

One other food – hot peppers – are commonly found to be contaminated with organophosphate insecticides, even though they don’t fully meet the criteria for inclusion on the Dirty Dozen list.

So these foods have been given their own mini list – called the ‘Plus’ list – meaning it’s worth buying the organic version of these foods too.

The items found to be LOWEST in pesticide residues are

If possible, buy the organic versions of the produce in the first list, which will pose the biggest risk to your baby.

Must fruits and vegetables for baby always be cooked – or may I serve them raw?

Healthy, Sensible Food Practices from the US Environmental Protection Agency

The Environmental Working Group’s list of ‘The Dirty Dozen’

How to freeze baby food