Well, being an American in China with a small baby can be hard enough but add in the Chinese in-laws and you’ve got war!

That’s pretty much how the first few months of my little girl’s life were spent, mommy and grandma butting heads.

I never really wanted to feed Isis rice cereal but being over here severely limited my options. So I did feel that rice cereal was something safe that she could eat and I wouldn’t have to spend so much extra time trying to track down a list of ingredients that I couldn’t translate.

But her Chinese grandma was totally set against feeding her any store bought food. She insisted that Isis be fed a rice gruel…which was just white rice and water. The only problem was that she would fill up on that and it really had no nutritional value.

Anyway we went back and forth (with grandma feeding her what she wanted when I went to work) until I put my foot down. I had started to notice that Isis wasn’t going poo as often and that she was straining very hard when she did.

From a process of elimination (grandma out of the house first) we found that it was the rice that was blocking her up. She had very little fiber and just way too much starch in her diet.

Now straight formula was not too bad but this ‘innocent’ solid had changed the way she processed foods. It took a few weeks of an oatmeal and green veggies diet paired up with a prune tea to get her unplugged but she’s now no longer straining.

For my next one (coming soon) I will just skip the rice/ rice cereal/ grandma’s advice and stick to veggies and meats as her first foods.

I found that mashing sweet potatoes and adding in formula would do the same job as rice cereal because it too could change consistency and had a great taste she enjoyed. And sweet potatoes are really easy to prepare as they are just roasted in an oven, broken in half and scooped out. They are even easier to transport then a jar because you don’t even have to add the formula and don’t need a spoon to feed in a pinch. 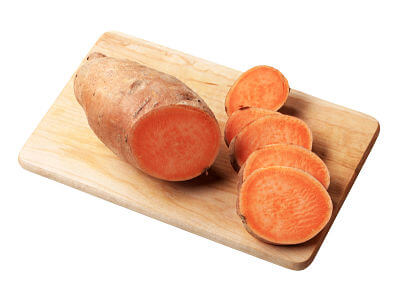