Behind the times, but happy and healthy! 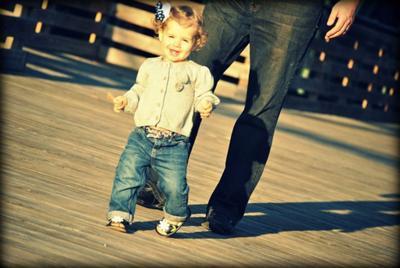 My daughter just had her first birthday August 29th, and is perfectly happy and healthy!

We were told by our pediatrician that we could start solids as early as 4 months also. I thought it was way too soon! So, I decided to breastfeed exclusively until 7 months old, and slowly start adding in cereal mixed with breastmilk. At 9 months we added in dinner from there, then lunch (10 months), and the breakfast (at 11 months). We still nurse in the morning, late afternoon, and bedtime. She is right on track with her weight and growth, and has only been sick twice in 1 year!

I’ve felt a lot of pressure from family (exclusively the inlaws) to move more quickly and be more lackadaisical in my approach to feeding my daughter. But I have been making her baby food since day 1, and aside from some store-bought puffs and teething biscuits, that’s all she’s had. I know what’s best for her right now, and I’m very comfortable taking things slowly!

I’ve felt a little confused as to when to start my baby on solids and how quickly to “get through them” as far as trying stuff, as she’s been exclusively breastfed up til 6 months and was quite happy about it – chubby as anything!

I have felt pressure from family to begin getting her on solids – and especially to have her eat solids for her meal rather than breast milk – as well as pressure to keep up to her cousin who is six months older.

However – I just realized recently that my mother-in-law only breastfed her babies for a few months, and my cousin was put on formula at 3 months – so of course their experiences would be different than the one that I’m trying to provide for my child.

Moral of the story – there is a ton of advice out there, but I’m learning to really think about what’s best for my baby, and not compare her to other babies.

How overfeeding solids may affect breastfeeding

But now she is not breastfeeding properly. I was really concerned about this – I thought maybe she didn’t want to breastfeed any more. But after seeing the doctor I now realize that I have been overfeeding her…

Another reason for pressure to start solids early

My baby girl is now 6 months but the pressure to start feeding her solids (or at least supplement breastmilk with formula and then solids) started when she was 3 months old. I’d done my homework and planned to keep her on exclusive breastmilk until 6 months, and I told family that. And they were negative about that choice! What I realized is, they knew they’d supplemented with formula with their babies and then started solids at about 3 months, so me coming along and saying my research said “that’s not the way to go” was felt like a criticism of their choices to them. Even though that’s not at all what I meant.

So my lesson learned is to say “I know there are many different ways to handle this, but for me and this baby I feel that breastfeeding until 6 months – since she’s gaining weight just fine – and then introducing solids is the way to go. But I respect that mothers have many options.” Saying that seems to help people feel a bit less defensive, although I also try to educate young/new mothers as to why I am making these choices.

I have a baby boy. I started solids in his 6th month. Every one in my family and my pediatrician was saying to start at the age of 4 months, but I kept my son exclusively on my feed… he was gaining good weight!

When he was in his 6th month I started with little supplements – like first I gave him only watery food such as water of pulses, then slowly I gave him cereals like rice or oat cereal in fine powder form.

Introducing solids to my breastfed baby at 4 months

At 3 months of age my daughter was 18 lbs. I fed her breast milk alone. At four months I was pressured into introducing solids to her. I started out with organic oatmeal cereal for a week then carrots and pumpkin. I did this because I went back out to work and the baby sitter that I left her with was complaining of the difficulty of feeding her the breast milk by spoon (she never took the breast milk in a bottle).

Feeding her the solids caused diahorrea and a 3 lbs loss of weight. I took leave from work and I immediately took her off the solids and put her back on breast milk alone. The diahorrea stopped and she gained 2 lbs.

I am now back at work and she is five months and now 18 lbs. I changed the baby sitter. She is now eating breast milk mixed with oatmeal cereal. I make it very runny. She has no diahorrea etc and she is eating very well.

My son is 7 months old, I started solid food introduction when he completed 6 months. I started with sweet orange juice at first, then added some mashed bananas and papaya. He loved it.

Once he was eating the fruits okay, I started with savory food. I make them myself. It consists of 1 portion of protein, 3 of vegetables, 1 of dark leaves, 1 of carbohydrate, 1 of oil, very little salt, onion and garlic.

He started eating 5 tea spoons, now he is eating a full desert plate, twice a day. The meat I use is chicken or mince meat – I am about to start to introduce liver and egg yolk next month, when he completes 8 months.

I still breastfeed him an average of 5 times a day (you need to be careful not to breastfeed too close to the solid feed – you need to leave a gap of at least 2 hrs).

I also give 2 bottles of 120ml of Nan 2, one of them at night mixed with natural oats. I don’t like cereals for babies because they usually have sugar.

My son’s pediatrician wanted me to start introducing fruit when he was 5 months old, but I decided to wait until he completed 6.

Giving solids to my baby boy…

I have been pressured by family and friends since baby was born and all I did is ignore them and continued nursing because I feel that its the best thing to do for my baby boy.

My experiences with breastfeeding my 2 kids

I would love to share my story with other women of this world.

I breast fed my 2nd kid for 6 months, later I started with solids. Now she is perfectly fit and fine. She eats almost everything.

It is just a great experience for me, because I fed my elder kid for only 4 months and then started with solid and bottles. Ooooooops. I had a very very tough time, like sterilising bottles for day and night. She used to be very fussy at her eating, not healthy and sometimes with allergic reactions and fever.

Now my younger one is very very healthy, I still breast feed her and she is very easy. I can travel with her to any corner of the world.

SO YOUNG WOMEN….. Go ahead, breast feed your kids and be healthy

Starting Solids – Everyone Wants A Turn…

I am a first time Mum of a 7 month old beautiful girl. We started solids at approximately 4 months & have been slowly introducing different fruits & veggies one at a time. I have only given my daughter home made purees & am not comfortable with any store bought stuff yet as my husband suffered from allergies from an early age.

I have felt pressure from all my family about feeding my daughter just about anything they can get their hands on… I am often told at meal times “here, let her taste this” anything from meats to processed foods & sweets. As previously mentioned, I am sure that people forget how old their bubs were at the time different foods were being introduced!

Although I am very firm in my decisions & constantly tell my family members ‘No’ I get never ending pressure to offer my baby all sorts of things. Once I have said no, I often get grumbled at & am told that I am being too controlling.

I still stand by my decisions & don't feel that I have to please anyone but my daughter. I don’t claim to know it all, but I do tell all my family that it is ultimately the parents decision on how & when to introduce solids.

My baby is now 7 months old. I have been breastfeeding and have now also started her on solids.

By the time my baby was 4 months my family was constantly telling me I should start solids as she used to cry in the evenings or wake up during the night.

I live in an extended family and I have to say it was one of the most challenging things I’ve done, to stand my ground and not let anyone pressure me into feeding her solids. My baby was always gaining the weight when just breastfeeding, but everyone around me felt they knew best.

Me too! by: Anonymous

My family was the SAME way. By 4 1/2 months every time I saw any member of my extended family they would make comments about how she was hungry, needed cereal. I felt very ganged up on but I refused to buckle to pressure. My daughter is 8 months now and enjoys one meal a day. I also make all her baby food and have different health standards than my family. They have really ridiculed me about my food choices. They seem to believe not giving her sugar filled applesauce makes me a bad mother? Oh well, my baby and I are doing GREAT!

I have a 6 month old boy who I started on solids at 4 months. I had a lot of pressure form family as my son has reflux and he would vomit all day long. Since starting him on solids he has got a lot better with the vomiting and seems to hold his milk down a bit better.

My son is a breastfed baby and I don't feel that I started him too early on the solids. Every baby is different and I feel that it should be your choice when you start your baby, as you are their mother and you know your baby.

Start solids, then stop, then start “for real”

I gave my first a single bowl of rice cereal made with breastmilk at 4 months old. His pediatrician recommended it, to supplement his iron supply. He took to it greedily, too greedily, he would stick his face down to the spoon and he didn’t get much in his mouth. And yet, I waited til he was six months old, just before his check-up, so I could tell his ped. without lying, that “Yes, I am feeding him iron-fortifed cereal”.

Even though the ped. recommended the extra iron, I just felt that breastmilk was all he needed.

He is no worse for wear, I can tell you that.

He eats everything I put in front of him from Brussel sprouts to feta cheese! He’s a sturdy, solid boy at nearly 50 lbs. at 4 yrs 3 mths old.

Click here to return to Introducing Solids to Your Breastfed Baby.