What is being called “Baby Led Weaning” is an an approach that has been practiced in the Caribbean for many years. I have seen it done by family and friends – there was no specific name given to it.

Parents would say things like “let the baby put their hands in the food and feel it and feed himself. It will help them to develop properly.” or “Let Him feed himself. Don’t worry he will eat what he wants…”

So it is not new, just named – and indeed it is an excellent way to feed children and help them develop mentally.

Baby Led Weaning – The Second Time Around
by Amy(Australia)

We did baby led weaning with 2 out of 3 of our children.

Our first child we did the whole spoon fed commercial foods. I think that was more scary with all the gagging. Then 2 and 3 were two very independent boys. We tried spoon feeding with no#3 but would stand for it. He was taking the spoon off us anyway so we figured have your own food.

We haven’t looked back.

There usually isn’t much of a mess because most of it goes in the mouth. Being a Child Care worker I think it’s great for their hand eye coordination and sensory development. It’s also a lot easier when dining out with friends because I can still eat my lunch and he can eat his. I can steam up some apples or pears and take them with us.

The mess thing doesn’t really worry us – we figure if he’s having fun eating them that reinforces that meal times are a positive thing.

Baby Led Weaning all the way!
by Charlotte Redfearn (England) 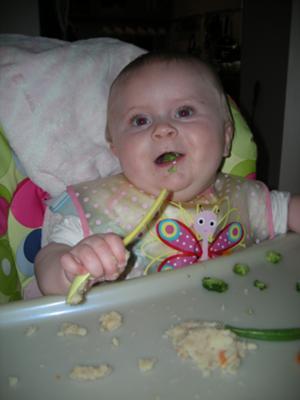 Our daughter is now 13 months old and she started baby led weaning (BLW) at around 6 1/2 months old.

Our health visitor mentioned it to me originally and i was instantly intrigued but needed to know more, so she lent me a book by Gill Rapley & Tracey Murkett titled Baby-Led Weaning. The book was fantastic and helped me understand the concept of it all and how to get started, we have definitely not looked back!

What really surprised me from a bit of researching, was that up until early 1930’s most babies were automatically following BLW and the change from this was only due to changes in the way babies were breastfed. Mothers started following on the clock feeding not supply & demand, so limiting time spent at the breast, hence insufficient milk was produced, so pureed foods were given at early ages to help fatten up the baby!

I found this quite scary, that it appears many eras of babies have been spoon fed purees from a very young age based on a seemingly incorrect decision about breast/milk feeding. This was my understanding of the research i found and I felt BLW was the most natural way a baby should learn to eat.

The beginning was a bit scary, especially with Lou being our first child, the first few occasions when she gagged we were quite panic stricken, but once we got our heads round the fact that the gagging is just your baby learning to deal with food in their mouth, we calmed down and watched with amazement at this little baby picking up sprigs of broccoli, carrot, cauliflower etc and munching away on it with her gums!

To ensure a variety of textures & tastes we also loaded spoons with food, which she very quickly was able to pick up & feed to herself. Friends with children all comment on how much more advanced Lou is at eating and how well her motor skills, hand eye coordination and speech is, along with her great confidence and contentedness at being allowed the freedom to explore her independence.

With BLW you just need to get your head round the concept of basically treating your baby as you would a dinner guest (so don’t put food in their mouth), let baby take the lead, eat together when you can because baby will copy you & learn quickly and don’t stress over mess…it all clears up!!

I will definitely do BLW again with any future babies, it has been so far a lot of fun and very rewarding.